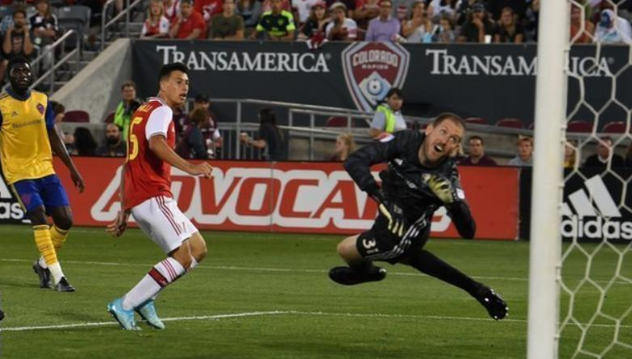 Arsenal kicked-off our pre-season tour of the United States with a comfortable win as an inexperienced team beat Colorado Rapids 3-0 in Denver during the early hours of the morning.

Unai Emery fielded a young side with the likes of Robbie Burton, Tyreece John-Jules, Zech Medley, James Olayinka and Dominic Thompson joining Bukayo Saka in starting the match. Calum Chambers and Carl Jenkinson also got a run out along with Eddie Nketiah and summer signing Gabriel Martinelli.

Saka looked lively throughout and the highly-rated winger opened the scoring midway through the first half when he dinked over the keeper after being found by a fine throughball from Nketiah.

Olayinka then doubled Arsenal’s lead with a superb goal as the 18-year-old found the top corner from 20 yards to make it 2-0 after winning possession in the middle of the park.

Martinelli then wrapped things up in the second half as the Brazilian teenager found the back of the net with a clever finish off his chest after being found by a Thompson cross. It was a deserved goal as Martinelli was arguably Arsenal’s best player on the day.

Emery introduced our big guns with 15 minutes remaining as the likes of Pierre-Emerick Aubameyang, Alexandre Lacazette and Mesut Ozil were introduced from the bench but the score remained 3-0 as we got off to a winning start to our pre-season tour.

Here are highlights and the goals: