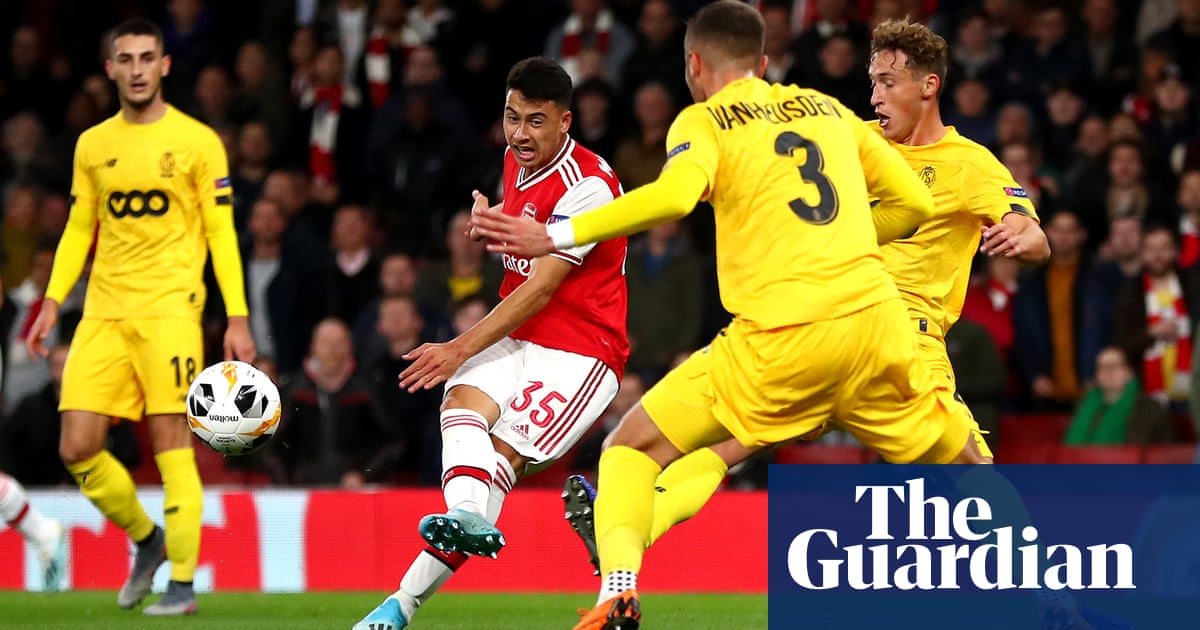 Unai Emery has challenged Arsenal’s young players to push their development to the point where they are genuine, and regular, contenders for the first team.

Emery has given a host of the club’s emerging talent opportunities to shine this season and, by and large, they have done so. That was certainly the case in Thursday’s 4-0 victory over Standard Liège when the 18-year-old Gabriel Martinelli scored twice during a brilliant attacking display and Reiss Nelson (19) and Joe Willock (20) greatly impressed.

Three days earlier, in the 1-1 draw at Manchester United, Bukayo Saka, also 18, delivered an eye-catching performance and, as far as the manager is concerned, that is only the start of what they and players such as Emile Smith Rowe and Konstantinos Mavropanos can achieve.

“We can be excited by the process with the young players but also we must be calm because the process is continuing,” said Emery. “With Bukayo, Willock and others I want them to improve their progress in the squad.”

For now it is likely Emery will maintain his policy of using Arsenal’s youngsters mainly in the Carabao Cup and Europa League, but they could well get chances in the Premier League should the club’s senior players continue to look uncertain in those fixtures, especially at home.

Arsenal’s three league games at the Emirates Stadium have seen them beat Burnley 2-1, draw 2-2 with Tottenham having been 2-0 down, and overcome Aston Villa 3-2 after twice falling behind to the promoted side. Before Bournemouth’s arrival on Sunday, the message from Emery is relatively clear – that is not good enough.

“We have played in the Premier League three matches at home and we have to improve,” he said. “We need more tactically and individually for the next matches. Sunday is the first. It is another challenge for us.”

As ever there will be intrigue over the involvement of Mesut Özil. The German has played only 142 minutes for Arsenal this season and was omitted entirely for the games against United and Liège, with Emery claiming after the latter that other players were more deserving of a place in his squad. It is obvious the manager has little time for the club’s highest-earning player but, alongside the digs, there continues to be an insistence that all is not completely broken between the pair.

“He [Özil] can [play for Arsenal] and now we are with a lot of players being competitive in each position on the pitch,” said Emery. “Every player is the same and I want them pushing to achieve a position in the squad.”