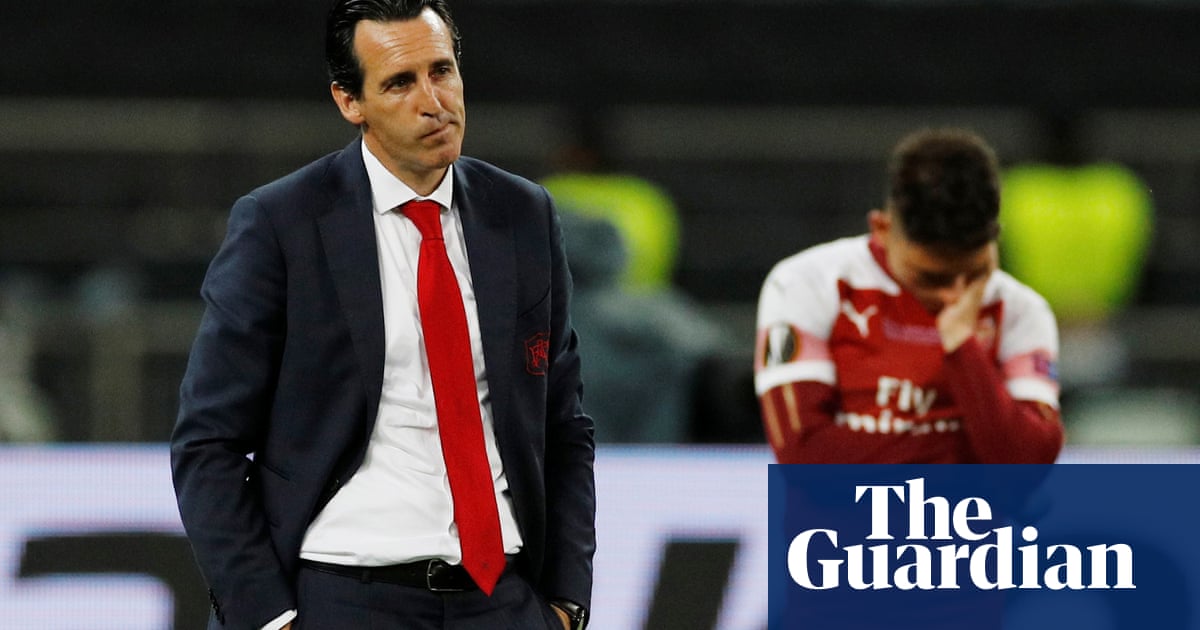 There was something almost pitiful about Unai Emery gesturing enthusiastically from his technical area, urging his team forwards, in the 90th minute at 4-1 down. He suddenly looked like a footballing King Canute, trying to stem a tide that washed all over Arsenal and left their present and future ambitions shipwrecked.

The scale of the capitulation left Arsenal in shock. At the end of it all, the shattering despair felled their players. They had been banking on this, hoping that the Europa League final would bring a happy ending to this season and positivity for the next with a return to the Champions League.

As if to confirm their plight, after the complications of staging the Europa League final in Baku, they will now spend another year in the continent’s B League having another bash at a tournament they were desperate to clamber away from. The cost is brutal. It costs them financially, it costs in terms of status, it costs in the way they try to show ambition and try to address the weaknesses in the squad in the transfer market.

There were so many disasters on the pitch. Arsenal’s defence got tied in knots once Chelsea began to express themselves. Pierre-Emerick Aubameyang and Alexandre Lacazette, so deadly in recent rounds of the Europa League, looked like they couldn’t score for toffee. Sead Kolasinac’s pass completion rate was dismal. Mesut Özil floated ineffectively, let the game pass him by, and suffered the indignity of being substituted for Joe Willock – a promising teenager who had played 64 minutes in the Premier League this season. Lucas Torreira left the pitch in tears. Ainsley Maitland-Niles had battled gamely before a rush of recklessness and a barge in the penalty area. Petr Cech, hanging up those gloves for the last time in the early hours in Azerbaijan, stood motionless at the end of it all in his penalty area. Alone, lost in thoughts, until Laurent Koscielny went to engulf him in a hug. His farewell performance in football, a game he had dreamed of between his current and former club before retirement, was punishing.

Emery looked devastated. One of his big ideas was to make his team more competitive but they looked lost once the game tilted away. Belief was completely drained. He had spoken repetitively during the season about chasing two routes back into the Champions League but his team fell at the last in both. They were in a strong position to finish in the top four of the Premier League only to crumble in the home straight – ending up a mere two points off third place exemplifies how one more positive result could have made a difference but they flunked four of their last five games in the run-in. The way they disintegrated in Baku, when they had so much to gain, reflected how the pressure ate at them and left them unable to rally when things started to go wrong.

In the post-Wenger world Emery talks a lot about his process but signals are needed along the way, positive signs and milestones that demonstrate progress as well as process. This was an Arsenal flop where familiar old failings came to the fore.

They are not particularly well set up to cope with the rebuilding necessary. Arsenal do not have a technical director, or a head of recruitment, going into a summer that was always going to be an important one regardless of this result. A number of players are going – in addition to Cech, Danny Welbeck is out of contract and Aaron Ramsey has already signed for Juventus. Özil remains an expensive luxury that Emery has tried to connect with but has not really. Their resources for new purchases, young players on the up in the mould of Torreira, Matteo Guendouzi and Bernd Leno, are limited and they will be expected to sell to buy anything beyond a budget of roughly £40m. Oh, and the “welcome to Europa League” sales pitch is not exactly a help.

Stan Kroenke, the American owner, was absent although his son Josh, who is more hands-on, was in attendance at the final. He couldn’t fail to see the failings, although whether there is the desire to do everything in KSE’s (Kroenke’s investment holding) power to act on them is doubtful. This at a time when clubs such as Newcastle and Everton are trying to flex more financial muscle so Arsenal might have to look over their shoulders as well as at what is in front of them.

Ultimately, Arsenal messed up the end of the season twice over and the hierarchy, head coach and players have a lot of thinking to do. Not all of that will be positive.

In the bigger picture, they have lost their past four European finals, a time span encompassing teams from 1995, 2000, 2006 and 2019. The fact that it is a familiar feeling does not help them absorb this blow.