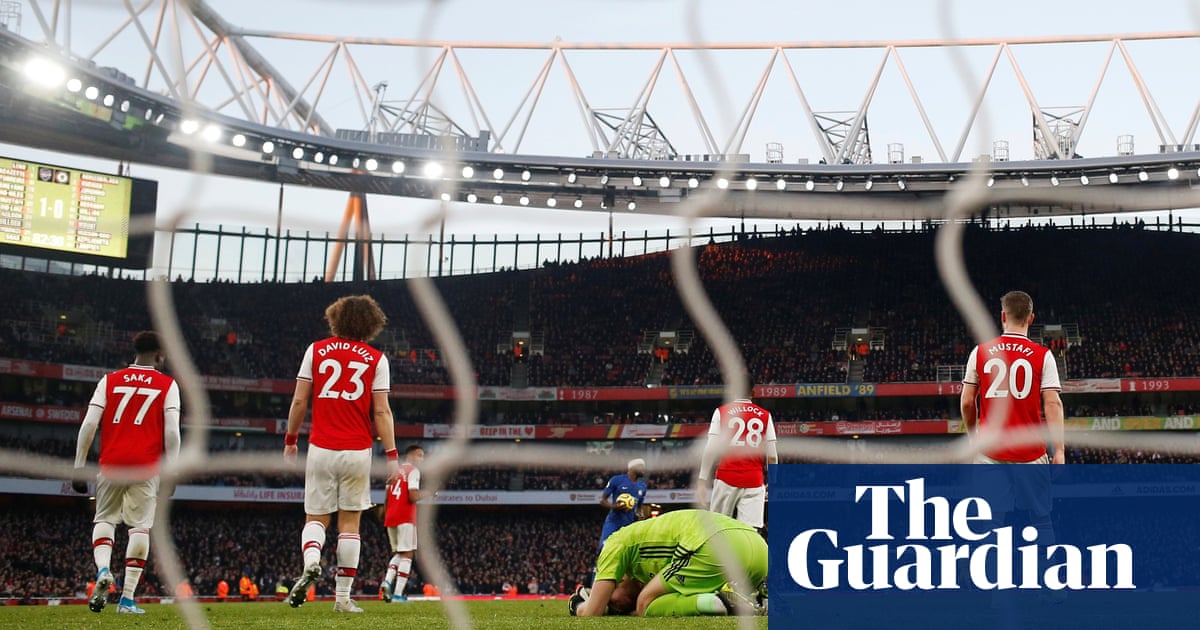 New Arsenal, same old Arsenal. There were 87 minutes on the Emirates Stadium clock last Sunday, the score was 1-1 against Chelsea and Arsenal had five men inside the opposing penalty area as they pushed for the winner. The move broke down, Chelsea countered at pace, Tammy Abraham scored what would be the decisive goal and, for the umpteenth time, everybody questioned whether Arsenal had any defensive instinct.

Manchester United are the visitors to the Emirates on New Year’s Day and it will be the showpiece fixture at 8pm, even if the Premier League table shows it is a meeting between 12th and fifth. Ole Gunnar Solskjær’s team have kept their season alive by rinsing attack-minded opposition on the break and the United manager would have licked his lips as he pored over the Abraham goal. Do Arsenal have to be wary of United’s rapier-like threat. “Very,” replied Mikel Arteta, the club’s new manager.

What Arteta wanted to make clear was that Abraham’s stunning late counter was not the result of a structural breakdown in the team he is trying to reboot. When Abraham received the ball out of defence from Willian 10 yards inside his own half, he had two Arsenal players in front of him – David Luiz and Shkodran Mustafi – and three in pursuit – Bukayo Saka, Matteo Guendouzi and Lucas Torreira. Abraham could see Willian flicking on the after-burners to get forward on his right and Mason Mount doing the same on the left.

At that point Arsenal had the situation under control. They had five; Chelsea had three. It was not a case of them overstretching in search of the winner, of a peculiar naivety.

That said, what happened next within a reasonably solid framework was concerning. David Luiz and Mustafi chose not to engage Abraham high up the pitch, rather to retreat and retreat, all the way into their own box. After Abraham popped the ball wide to Willian, David Luiz could not prevent the low cross and Mustafi was then slow to react in the middle. Abraham outmanoeuvred him before shooting low past Bernd Leno. It was also notable that Saka seemed to be cramping up. Unable to move freely, he could not stay with Willian while Guendouzi did not get back at all.

So, even as Arteta tried to take the positives in terms of how his players had “moved the structure” from attack to defence, he could see glaring deficiencies in the one-on-one work and fitness levels.

“It wasn’t a transition where we had a bad structure or a bad organisation, when we are defending big spaces on equal numbers or are outnumbered – it wasn’t the case at all,” Arteta said. “We made one half-bad decision [to back off] and these teams, when in space, they punish you, for sure. But the other option is to defend all the time and be there [in defensive areas] and we don’t want that.”

Arteta delivered the last line with a smile. Arsenal are a front-foot team, their mindset is to attack and they will remain that way under Arteta’s charge. What he wants is to put a structure in place which will provide numbers on offensive and defensive transitions, allow for options on the ball and spaces between the lines. The early signs in this regard have been encouraging. What he needs to learn is the capacity of the players to operate at his tempo, to make the right decisions and execute them.

The balance of the midfield will be key and, more precisely, how to find a role for Mesut Özil. Arteta’s predecessor, Unai Emery, tried everything with Özil but there was always the feeling that the off-the-cuff playmaker was not a natural fit for his style.

Arteta has given Özil the central attacking midfield platform that he craves in each of his games so far – the draw at Bournemouth and then Chelsea – and there have been positive signs. Özil has created chances, although his ability to do that has never been in doubt. With Özil, it is all about creating an environment; to have him switched on rather than drifting; to find a consistency that has often proved elusive.

“Mesut is putting in everything he has and his numbers, physically, have improved so much,” Arteta said. “On his own he can’t do it. He needs the collective structure, organisation and his teammates. He needs the team to play in a certain way to facilitate his strengths more and more in the game. That’s what we’re trying to do.

“I put him in the team if I see every day that his attitude, desire and understanding of what we’re trying to do is there. The moment that this changes, then he won’t play.”

Arteta felt a connection between his players and the Emirates crowd during the Chelsea game that “probably for a long time hasn’t been seen”. But will the bitter late twist have an impact on their confidence?

“That’s my worry now,” Arteta said. “I hope the result doesn’t affect them too much. They were all physically blown and disappointed in how the game ended because they didn’t feel they deserved that but we have to move on. They have to respond. This is the challenge.”