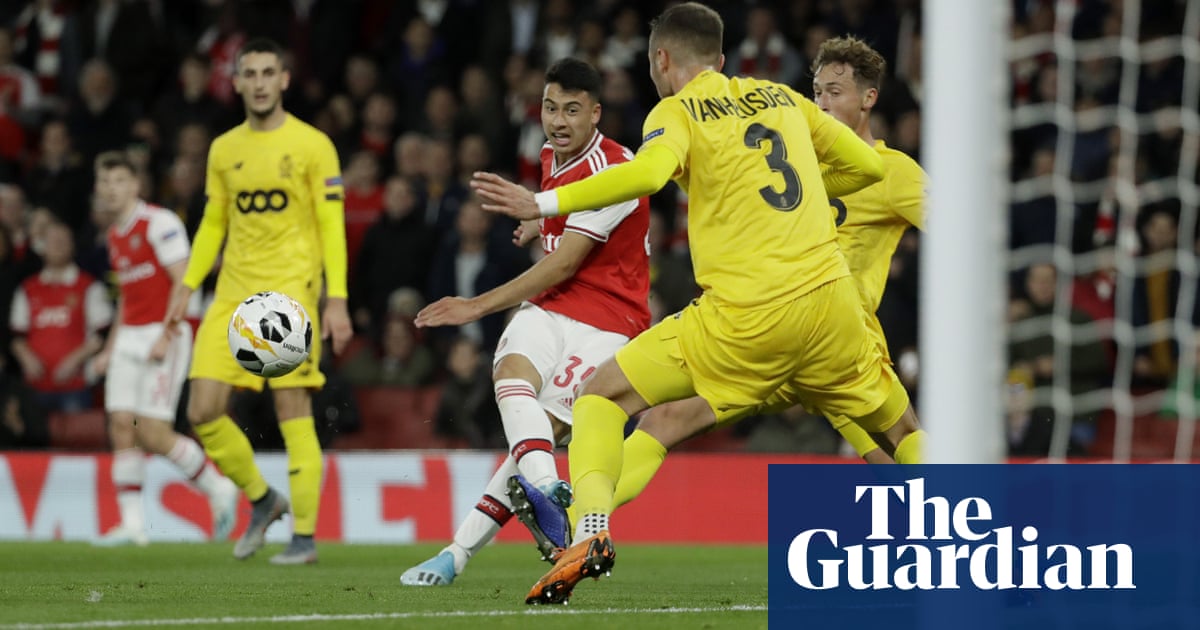 For Unai Emery this was an occasion to both savour his work and question himself. The Arsenal manager quite rightly took great delight in seeing his team maintain a perfect start to their Europa League campaign in rampant fashion but it hardly did his reputation as a judge of players much good that the man who got two of Arsenal’s four goals against Standard Liège is someone Emery does not feel has what it takes to be a striker.

That was Emery’s assertion of Gabriel Martinelli before this game yet he will now have to have a rethink. The 18-year-old, who arrived from the Brazilian side Ituano in the summer, scored two goals of high-quality, adding to the two he got against Nottingham Forest in the Carabao Cup last month, and throughout looked a real threat from a centre-forward position. If he cannot make it as a goalscorer then it is hard to see who can.

The teenager was not the only one to shine in what was heavily changed Arsenal team to the one that drew with Manchester United on Monday. There were 10 changes with practically everyone in red impressing and for Héctor Bellerín there was an encouraging display to savour as he donned the armband on his first start since recovering from a ruptured cruciate ligament.

Dani Ceballos could also celebrate his first goal for Arsenal, while Joe Willock also scored during a display brimming with aggression and positivity.

Liège’s supporters had all but filled the away section an hour before kick‑off and let out an almighty roar as their players came out for the pre-match warm-up. It was an impressive showing; what a shame, then, that a number of the them had let themselves down by forcing an evacuation of King’s Cross underground station – and subsequent panic among London commuters – after setting off flares inside the building.

Liège sprung a surprise by switching from their regular 4-3-3 formation to a 4-4-1-1 setup, yet if that had been an attempt by their manager, Michel Preud’homme, to spread confusion through Arsenal’s ranks it did not work. Quite the opposite. The hosts started brightly and after 21 minutes it was their opponents who were left scratching their heads after finding themselves 3-0 down.

Martinelli scored twice inside three minutes, the first a lovely glancing header following Kieran Tierney’s cross to the near post and his second a composed finish from practically the same spot and into the same part of the net having eventually got control of a delivery from the energetic and dynamic Reiss Nelson.

Joe Willock, who was also impressing on the right side of midfield, got the third on 21 minutes, leading the home supporters to chant: “Are you Tottenham in disguise?” in the direction of the visitors in reference to Spurs’s 7-2 defeat at the hands of Bayern Munich on Tuesday.

Liège looked to fight back and on 40 minutes their top-scorer, Maxime Lestienne, forced a save from Emiliano Martínez with a powerful near-post drive. But in general they offered little going forward while defensively Liège were proving largely shambolic against young and hungry opposition.

Preud’homme no doubt used the half-time break as a means to address his team’s failings but it had no discernible impact on proceedings. Arsenal continued to torment their opponents after the break, moving the ball quickly and crisply up the pitch and on 53 minutes Martinelli should, and could, have completed his hat-trick after connecting with Willock’s low cross. His finish, however, from practically in front of an open net, drifted wide.

The teenager soon turned provider, lifting a cross over Liège’s goalkeeper, Vanja Milinkovic-Savic, and into space for the on-rushing Ceballos to stab the ball home.