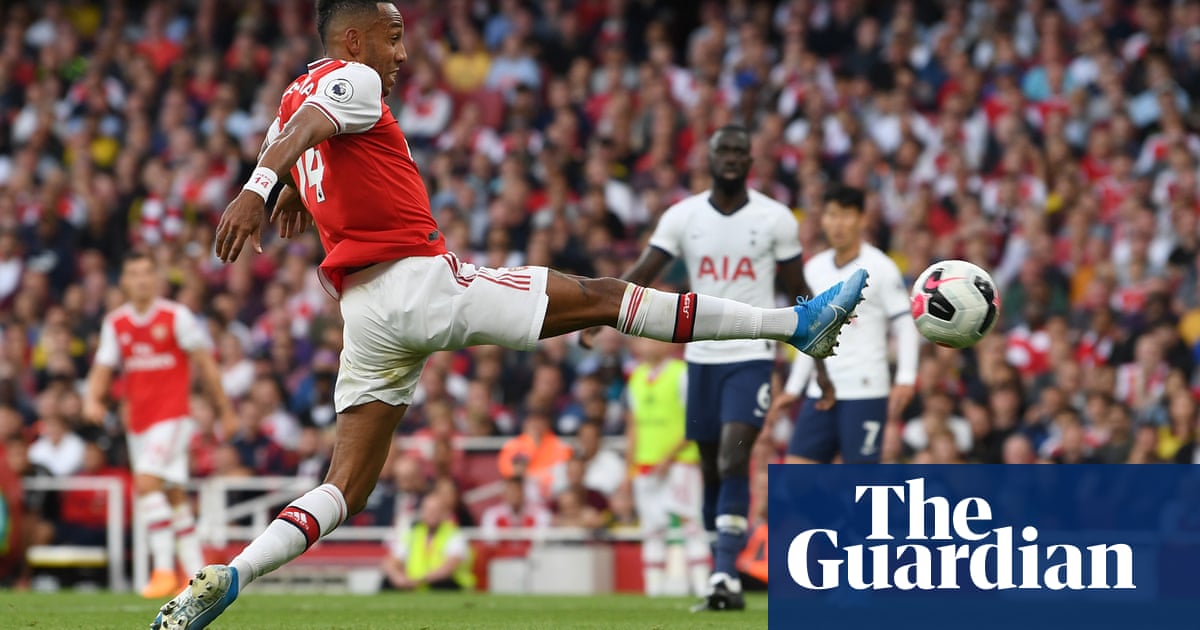 Emotions were at boiling point as a rip-roaring north London derby hurtled into its final quarter when Unai Emery – his Arsenal team trailing 2-1 – decided to make a move. It was not a universally popular one. Off came Alexandre Lacazette, who had been excellent, and on came Henrikh Mkhitaryan. The switch was jeered by sections of the home support.

Emery would be vindicated. The idea was to give Pierre-Emerick Aubameyang a central role and, four minutes later, he had ghosted in behind Jan Vertonghen to touch home Matteo Guendouzi’s lovely ball.

Arsenal gifted Tottenham two first-half goals and, in defensive terms, this was a performance that their fans watched through their fingers. But Emery’s spirit of adventure held sway. His team poured forward at every opportunity and they deserved the point for what they did inside the final third. On this evidence, they will be a gripping watch this season.

Spurs would probably have signed for the draw beforehand, given the uncertainty that has gripped them behind the scenes in recent weeks and the manner of their home defeat to Newcastle last weekend. They would not have done when Harry Kane put them 2-0 up from the penalty spot, to build on the advantage given to them by Christian Eriksen, who now looks likely to stay at the club after agitating and waiting for a move to Spain. But Spurs could not keep Arsenal out, with Lacazette sparking the fightback with a goal in first-half stoppage time.

The atmosphere crackled throughout, with Arsenal bringing the intensity in the early running but Spurs took control upon their first forward thrust. Sokratis Papastathopoulos made the decision to step up to contest a header on halfway with his teammate, Granit Xhaka, and Kane and Arsenal were in trouble from the moment that Kane won the flick-on.

Papastathopoulos was out of position and from there, it was too easy for Spurs. Son Heung-min played in Erik Lamela and, although his low shot for the far corner lacked power, Bernd Leno could only pat it back out. Eriksen arrived to tap home – the easiest finish imaginable – and Emery turned on his heel in anguish. It was so soft from Leno but his was only the final error.

Pochettino had shuffled his pack to answer a selection crisis at right-back. Nobody could remember Davinson Sánchez having played in the position and it meant that Pochettino could recall Vertonghen in the centre of defence. The higher profile recall was Eriksen and he flitted to good effect.

Spurs shimmered with menace on the break, particularly in the first half, playing into the spaces between the lines and with Son’s pace a persistent threat. Arsenal wobbled. Witness David Luiz’s decision to run away from the advancing Son to cover the centre on one first-half counterattack. Son ended up drawing an excellent save out of Leno, who lurched from the ridiculous to the sublime. He got away with spilling a Kane shot on 36 minutes. Shortly afterwards, he kept out an Eriksen free-kick at full stretch.

Arsenal made errors, none more obvious than Xhaka’s reckless lunge at Son inside the area in the 39th minute. It was so late that many onlookers had followed the play to the next action. That Kane would convert the stonewall penalty was never in doubt.

Back came Arsenal to give themselves hope at the end of a tumultuous first half. After Nicolas Pepe had drawn a fine low save out of Hugo Lloris, the Arsenal winger fed Lacazette, who tiptoed away from Vertonghen to slam home. The goal surely saved Arsenal from hearing boos at the interval. Pepe was a bright spot in the first half as Emery started him in a front three alongside Lacazette and Aubameyang for the first time. He had been unlucky earlier to see a header blocked by Danny Rose.

The tempo remained breathless after the interval; the entertainment value sky high and further goals felt like a certainty. Arsenal were open; they could not suppress Son but they concentrated their efforts on flooding forward. Guendouzi forced Lloris into another save and, from the resulting corner, Sead Kolasinac narrowly failed to apply a decisive touch to a Lacazette flick. At the other end, Leno saved well from Son and Kane rattled the far post.

Emery made his changes and Arsenal attacked with an irrepressible zeal. One substitute, Dani Ceballos, extended Lloris from distance before Aubameyang plundered the equaliser. It was the prompt for Arsenal to exert an almost suffocating press. Spurs could not get out and only one team looked like scoring again.

Xhaka worked Lloris from distance and Arsenal thought they had found the winner when Papastathopoulos bundled home only for the crosser, Kolasinac, to have been offside. It was as close as they would come.