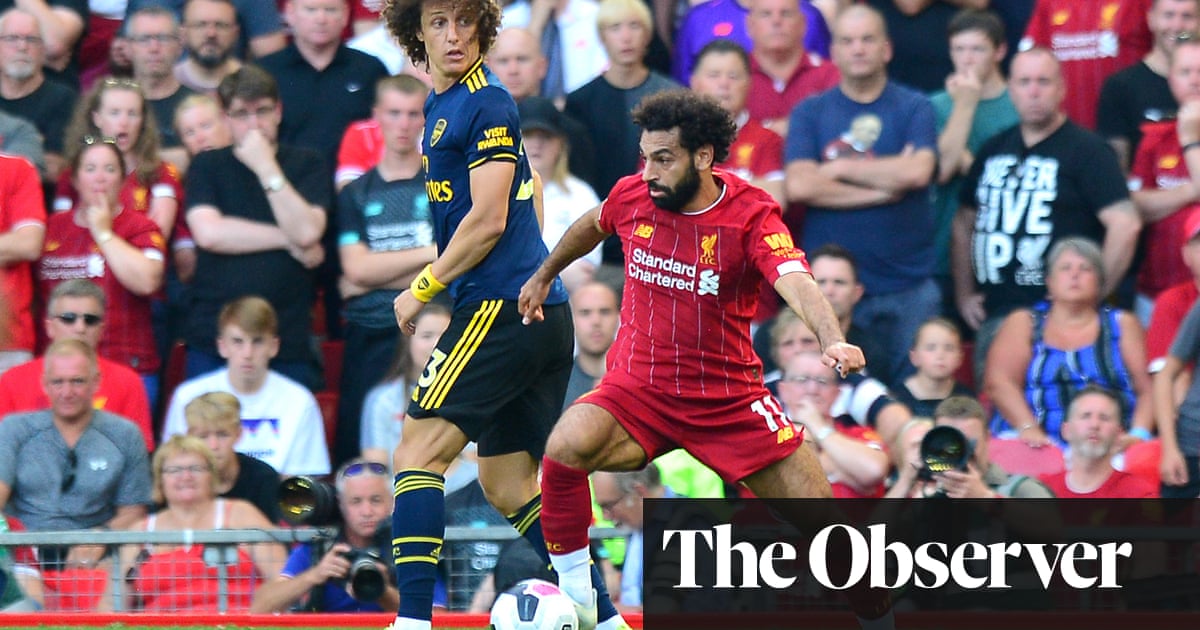 Another trip to Anfield, another heavy defeat for Arsenal. The best that can be said for them here is that, emphatic as the scoreline was, this was not as bad a display as many they have produced here in recent years. In their last seven visits Arsenal, unable to cope with Liverpool’s remorselessness, have conceded 25 goals. Anfield has been a brutal mirror and here again it reflected all their shortcomings.

There was at least some stubbornness and resolve, exemplified by Lucas Torreira’s late goal, but the rebuilding of Arsenal has a way to go yet. There were moments in the first half, three of them, when it even seemed possible Arsenal might take the lead. But the problem was a set-up so accepting of Liverpool’s superiority as to make it all but inevitable that they would succumb eventually.

By playing a diamond in midfield, Unai Emery in effect surrendered the flanks to the forward surges of the best pair of attacking full-backs in the Premier League, Trent Alexander-Arnold and Andy Robertson.

To an extent that is testament to the multiplicity of threats Liverpool pose. As Pep Guardiola has pointed out, there is probably no side in the world that attacks with such fury and such a range of options from narrow positions. Especially given how Mohamed Salah and Sadio Mané tuck infield, it is understandable an opposing side feels the need to overman in central areas.

But doing that inevitably meant Alexander-Arnold and Robertson, 23 assists between them last season, had a lot of possession. And that meant a lot of balls into the box. Again and again crosses flashed across goal. Again and again David Luiz or Sokratis Papastathopoulos cleared or made blocks. Perhaps the plan was to keep the Brazilian so busy he could not be distracted by thoughts of glorious sallies upfield, to sit so deep that he didn’t have to think territorially – something Mark Schwarzer, his former teammate at Chelsea, had highlighted as a vulnerability earlier in the week – but could keep fighting the duels he relishes.

Arsenal held out for longer than they had in any Anfield game since their 2-2 draw here in 2014, but the sense was always that they would crack. A second away clean sheet of the season, exceeding last season’s total by the end of August, never seemed plausible. Eventually a cross, especially against a team with the quality of delivery of Liverpool, is going to meet a forehead and sure enough one did, shortly before half-time. Joël Matip’s opener came from a right-wing corner, the 22nd cross Liverpool had mustered in the opening 41 minutes, the 19th from a full-back and the 12th from Alexander-Arnold.

The lesson, it is fair to say, was not learned. Arsenal emerged for the second half in the same shape and within three minutes had conceded again. Alexander-Arnold was again left absurdly isolated perhaps 10 yards outside the box and had time to measure his pass in to Roberto Firmino. A sharp pass round the corner set Salah behind David Luiz, but not far enough behind that the Brazilian could not grab his shirt and concede a penalty.

David Luiz is a curious player, one whose gifts and flaws are both vast and manifest. The glee with which his signing was greeted at the Emirates was at least partly born of the realisation that his presence meant the end for Shkodran Mustafi, whose confidence by the close of last season was almost as fractured as his relationship with the supporters. But those who had doubts would not have been reassured here.

Perhaps his performance was nothing unexpected: a midfielder converted into a third centre-back as a 17-year-old at Vitória in Salvador, he has never looked comfortable in a pair. His tendency has always been to charge out in search of the ball, and it was that fault that brought the third. It was not so much the ease with which Salah skipped by him that provoked concern as the fact he did it out on the left touchline about 10 yards inside his own half.

Arsenal’s pre-season optimism need not be extinguished entirely but this was a chastening lesson in where they currently stand. At least the trip to Anfield is over early this year.